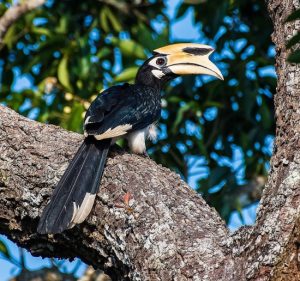 The coral development on the islands is not extensive and is restricted to a narrow band encircling each island close to the shore, especially on the southwestern and northeastern sides. Although the northwestern side of the islands is the area most influenced by the monsoon, in sheltered spots some good corals develop. These include elephant’s tusk coral, brain coral, staghorn coral and in deeper water, plate corals of the genus Pavona, and flower corals of the genus Goniopora. 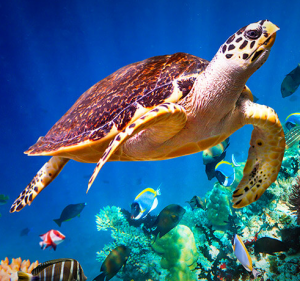 Animals found inhabiting these reefs include; Butterflyfish, Angelfish, Parrotfish, Stingray, Black tip shark, Grouper and Cowrie shells. In areas where the water is not so clear or is subjected to strong currents the species diversity is poor and is dominated by Seaworms, Crabs and brown seaweeds, of the genus Sargassum and Turbinaria. In places with steep rocky shorelines or where the water is very turbid, coral cannot survive. In these areas sedentary marine life is prevalent including; Sea fans, Oysters, Clams and Mussels, which can be seen covering the exposed rock surfaces.

The surrounding seas are a major spawning ground for the short-bodied mackerel which are a popular Thai meal. Mackerel, anchovy and squid are all caught commercially in the area. For more information see our: Angthong Marine Park dive sites.

The islands of the park are covered in forest, of which there are 4 types: